Make a Stop Motion Movie on Your iPhone or iPad. It's Easy!

Stop motion animation was key to many of the first special effects in movies. Jason and the Argonauts wouldn’t be as memorable without Ray Harryhausen’s creatures, and who could forget the original King Kong or even fully animated movies like The Nightmare Before Christmas?

What most appeals to me about stop motion, however, is that you don’t need a Hollywood budget or expensive equipment to do it. You can make your own stop motion movie using an iPhone, iPad, or iPod touch.

And patience—you’ll need a lot of patience.

Stop motion animation is incredibly time-consuming. It involves setting up a scene, taking a still photograph, and then adjusting the scene in a small way so that after you put all the photos together, the objects in the scene appear to move. (To learn more and see stop motion in action, watch the free video What is stop motion, and how does it work?)

For that reason, one of the top considerations before filming is finding a location that offers consistent lighting. Sunlight streaming through a window can be stunning when shooting normal video or still photos, but it’s unreliable for stop motion. While you’re adjusting the elements of a scene, the sun continues to travel without regard for your mini-masterpiece. When your movie is played back, shadows will jump and speed across the scene in a distracting way. So find a location where you can control every aspect of the light. 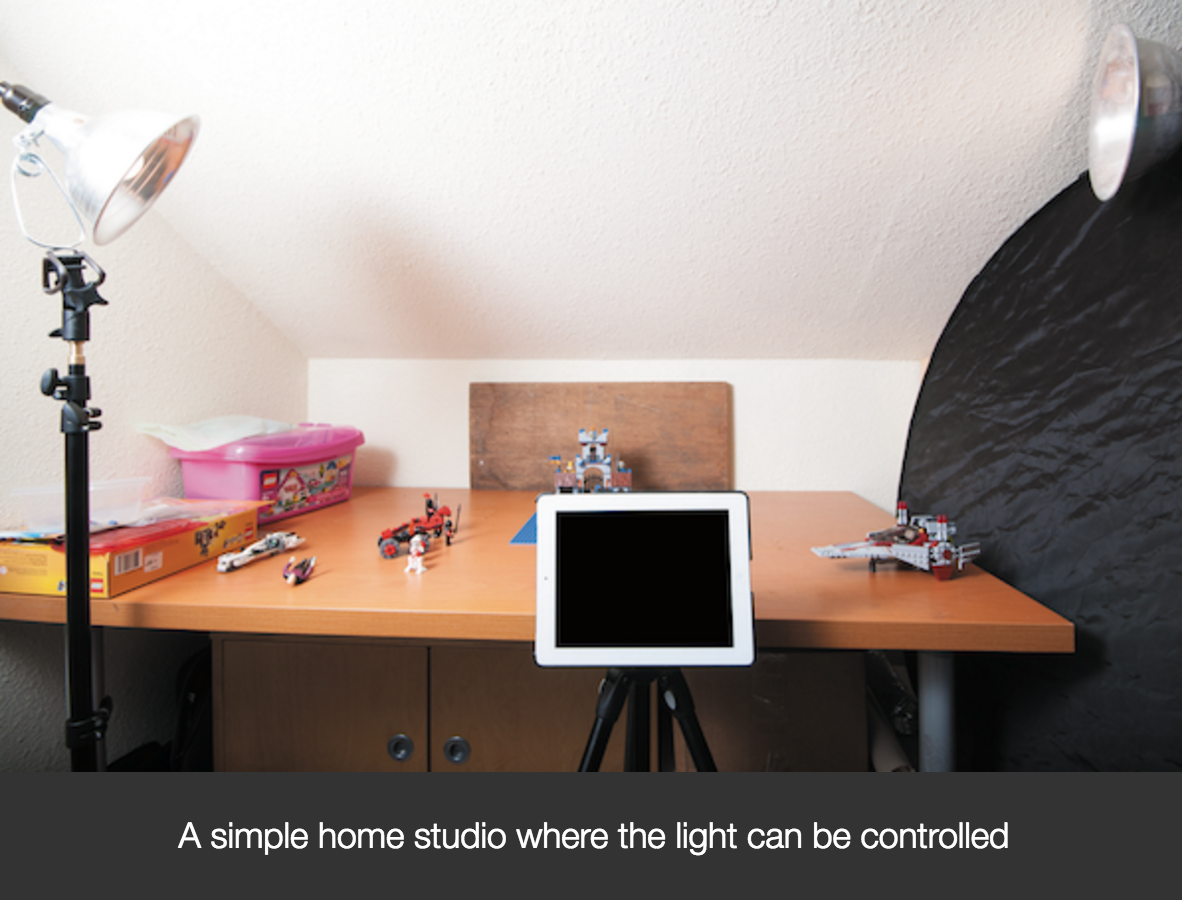 Several stop motion apps are available for iOS, but the one I prefer is iStopMotion for iPad from Boinx Software. The software runs only on the iPad (or iPad mini), but it has a secret weapon: a separate iStopCamera app can run on an iPhone or iPod touch and be controlled from the iPad. With that setup, the iPhone can be locked down on a tripod and not susceptible to tiny nudges when you capture each shot, which would be exaggerated in the animation.

In addition to having consistent lighting, you want to reduce variation in the focus, exposure, and white balance that the camera picks up. When you start a new project in iStopMotion, you’re immediately asked to set those.

The Exposure setting can be set to Continuous, which adjusts the brightness of the scene for every shot based on where you set the exposure reticle.

For example, if a dark object crosses the frame, the background will get brighter so the object is more visible. Alternately, switch to Fixed exposure to maintain the same exposure level throughout the video.

The White Balance setting works the same way, with the option to lock or unlock the color temperature of the recorded shots. Doing so preserves the illusion that the objects in the scene are moving at real speed.

Speaking of speed, it’s important to choose the frame rate of the movie you’re creating. A higher rate—in which more frames appear during one second—means more work, but also potentially smoother motion. The default in iStopMotion is 12 frames per second (fps); to compare, movies are projected at 24 fps, while home video is typically 30 fps.

Now here’s where the patience kicks in.

To capture a frame, tap the obvious shutter button. Then move the object(s) in your scene slightly. And tap the shutter button again.

You will immediately realize that the onion-skin feature is your best friend. Named after the translucent paper used by some traditional animators, onion skinning keeps the last-captured frame onscreen and projects the camera’s live view at about 50 percent opacity. You can see exactly where the objects will appear in relation to the captured frame, making it easier to create smooth movement. 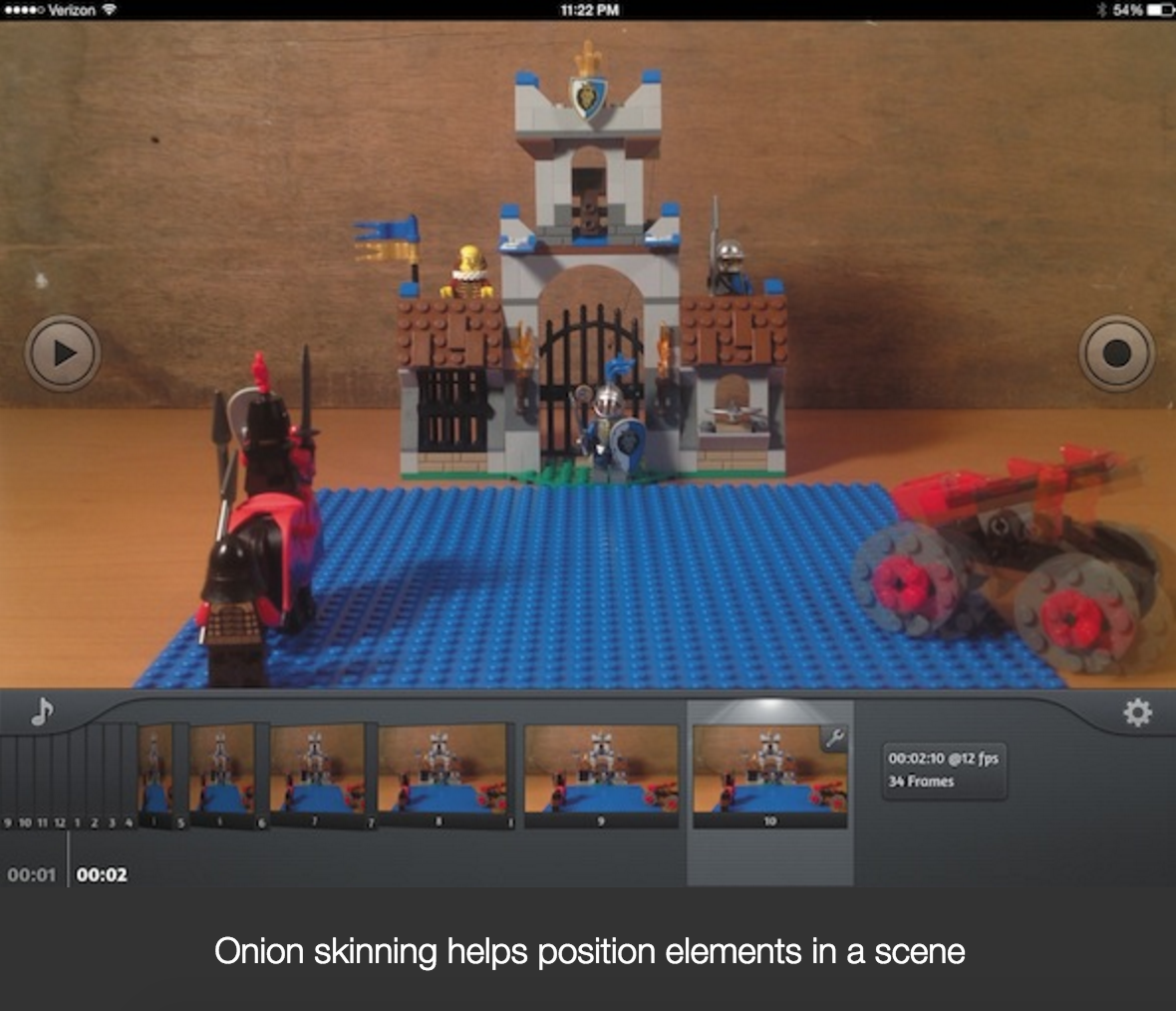 At any time, you can preview the work in progress. If a frame looks off, you can delete it and re-shoot it.

When you’re done, save the finished animation to the device’s photo library, share it via email, or upload it to YouTube, Dropbox, or a WebDAV server. The app can also turn the video into an animated GIF.

Of course, iStopMotion is just one approach, but it will get you started on the basics of making stop motion movies. For a more comprehensive look at the process, see Richard Harrington’s course Getting Started with Stop Motion Animation on lynda.com.