The Future of Your Company is Tied to Learning

Right now, a lot of employers and employees treat learning in their professional lives like most of us treat cardiovascular training in our personal lives.

Sure, we all know professional development is good for us, like working out is good for us. But, with so much else going on in our lives with work and families and (occasional) sleep, it’s often the first thing that gets pushed aside.

Well, the data is in, and the message is clear – that attitude toward professional development isn’t going to cut it anymore. Instead, research suggests there are going to be two types of businesses in the near future: ones that have robust employee teaching programs and win; and everyone else.

Specifically, the World Economic Forum (WEF) has analyzed how the world of business will change over the next four years. They concluded that more than 7.1 million current professional jobs will be eliminated by 2020, thanks largely to automation and changing geopolitics.

A mere 2.1 million jobs will take their place, some for positions that do not yet exist.

Even bigger than that, the study found that the jobs that stick around are going to change so drastically and so quickly, many of the skills needed to do them today will be obsolete in just four years. Specifically, the report found that 35 percent of core job skills will change by 2020.

Bottom line, a lot of jobs are going away, and the ones that are staying will require new skills. And it is impractical for companies to hire their way out of the problem, as the demand for people with select skills will be highly competitive, and yet those skills – and potentially those people – could become antiquated in just a few years.

Instead, companies will have to teach their existing people all these new skills. Many just aren’t sure how they are going to do that.

Diving into the numbers: Jobs are going to change, fast. 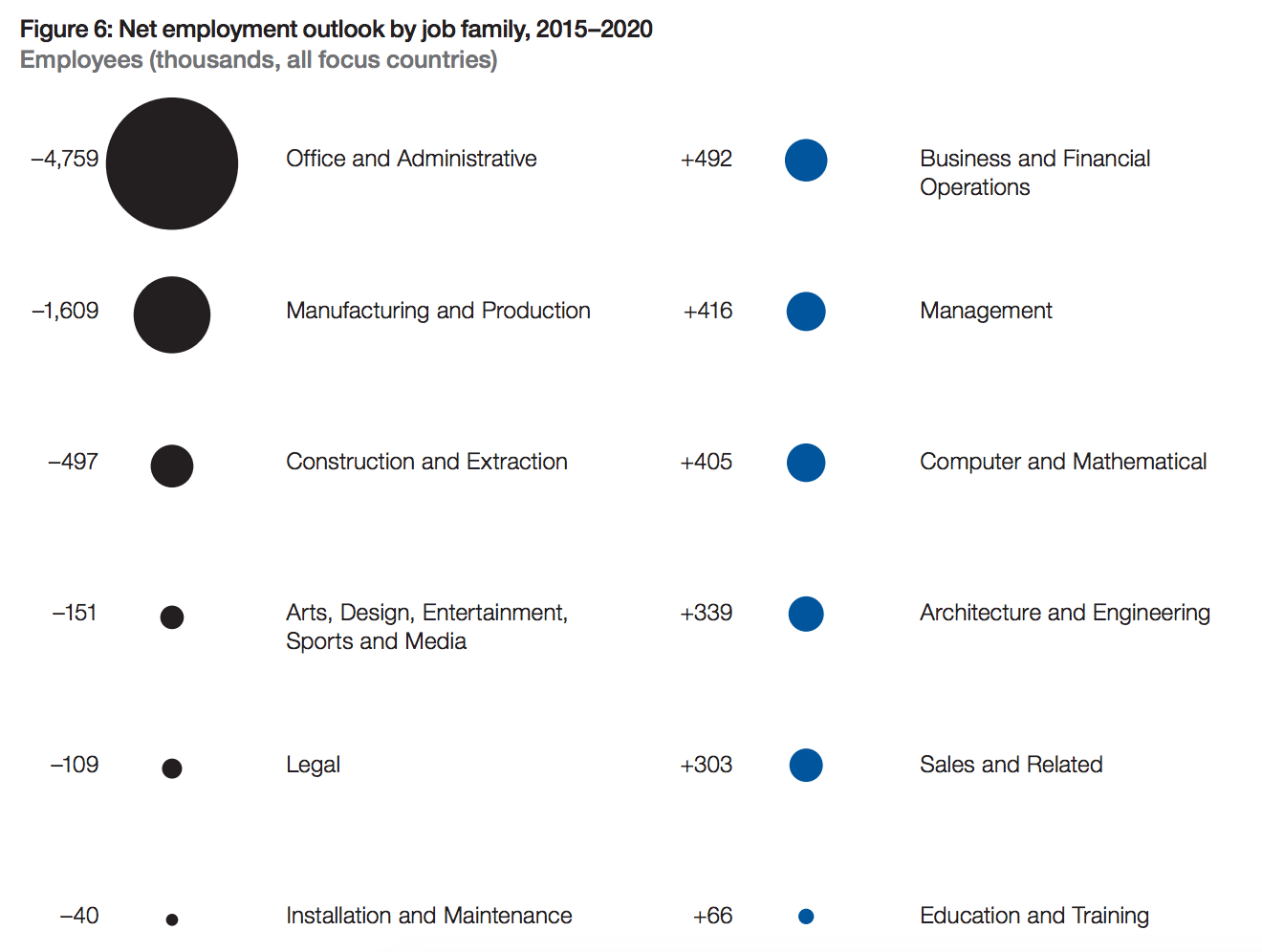 But the bigger point is that even the jobs of today are going to change so much by 2020, they’ll be barely recognizable. Thirty-five percent of the core skills needed to do today’s jobs will be different by 2020, with finance and infrastructure positions facing particularly swift evolutions. 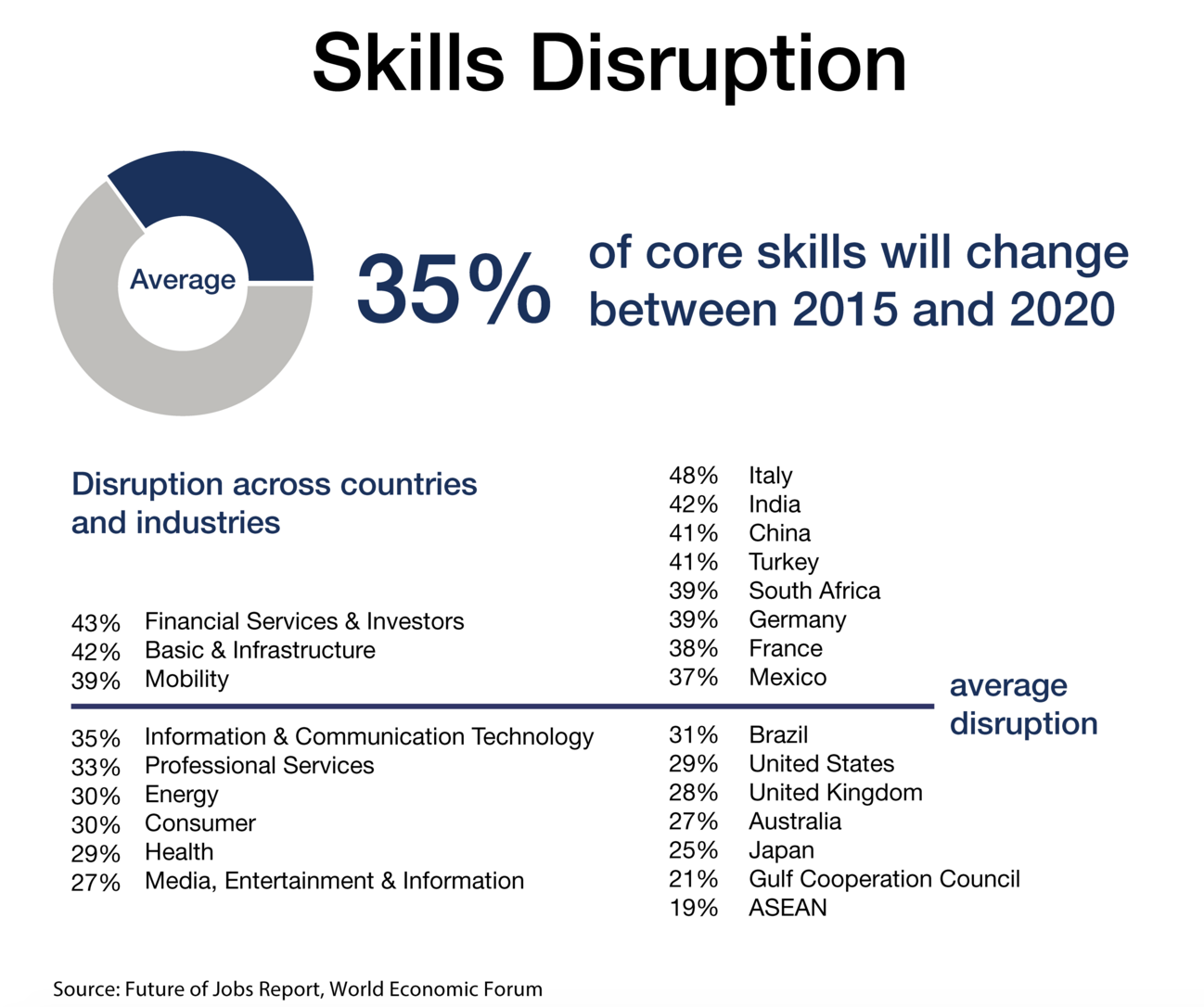 Companies want to teach their way out of this problem, but they aren’t confident in their teaching programs.

To counter this, companies can’t just keep hiring people that have new, needed skills. With change happening so quickly, that strategy would require either massive layoffs or a bloated workforce, along with astronomical recruiting costs.

Instead, when surveyed, nearly two-thirds of companies said they plan on dealing with rapidly changing demands by teaching their existing workforce new skills: 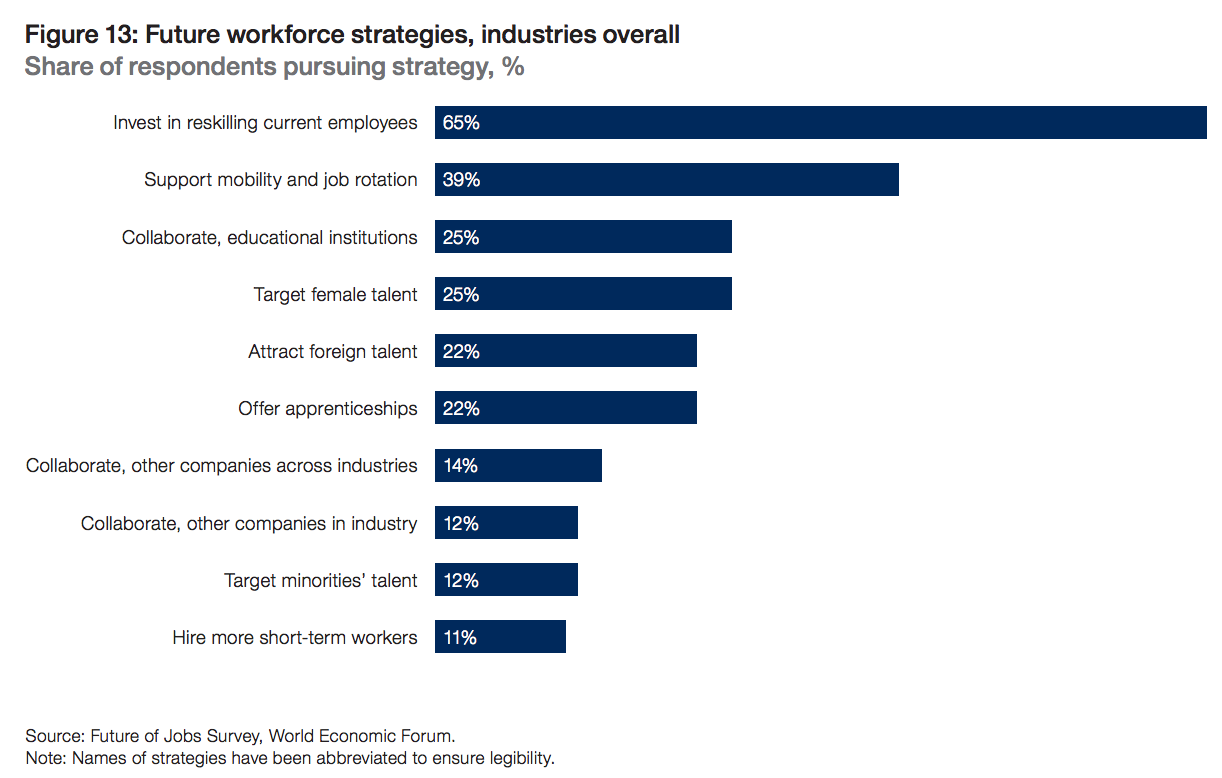 Sounds good, right? But therein lies another problem – in a WEF survey, a mere 53 percent of company’s chief human resource officers (CHROs) were reasonably or highly confident in their ability to teach their workforce going forward.

That means that nearly half aren’t. So, yes, most companies believe teach their employees are critical, and yet many aren’t confident in their ability to do that.

And that’s a problem.

What this all means to you going forward

All this sounds like the plot of a dystopian science fiction movie, where robots and new geopolitical concerns woof down five million jobs while drastically changing most others. That’s not completely accurate.

Instead, dealing with this problem simply requires a new way of thinking about learning. It means company leaders, from Fortune 500 CEOs to a manager of a seven-person team, prioritizing learning. It means organizations taking a hard look at their existing teaching programs, and doing what they can to improve them.

And, for all employees out there, it means taking learning seriously.

Big picture, it means adopting the philosophy laid out in one particularly insightful paragraph in the WEF’s report, reprinted here:

“For businesses to capitalize on new opportunities, they will need to put talent development and future workforce strategy front and center to their growth. Firms can no longer be passive consumers of ready-made human capital. They require a new mindset to meet their talent needs and to optimize social outcomes.”

To understand how to best prepare your company going forward, download our ebook today on how to build a culture of learning.