The Skill Gap Exposed In One Simple Chart

Starting in 2015, an unprecedented yet persistent phenomenon has sprung up in the United States – for the past 18 months or so, there have been more unfilled job openings than there have been actual people hired in the US.

Here’s a graph from the Department of Labor that shows that trend: 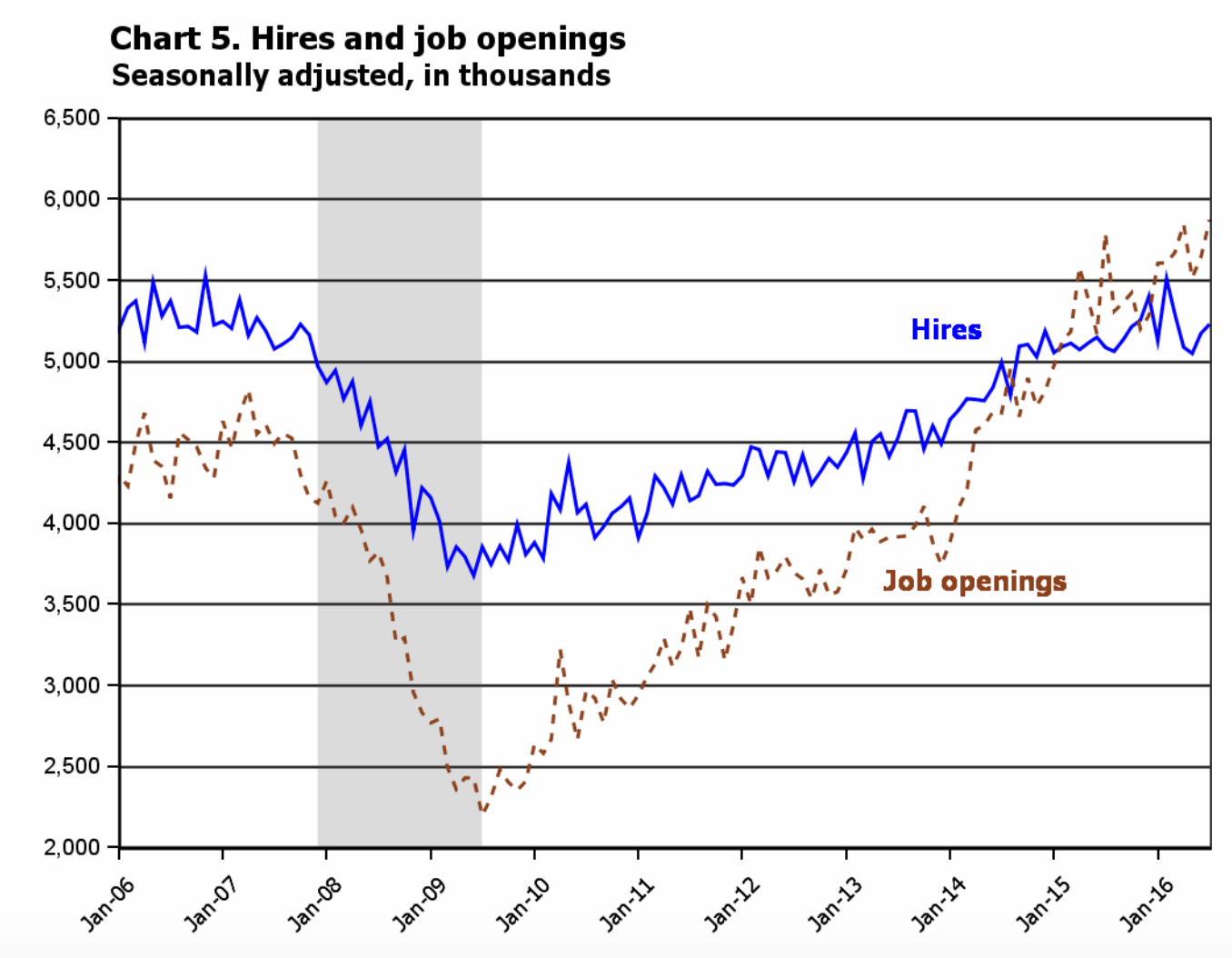 In July, there were 5,788,000 job openings in the United States, whereas only 5,084,000 people were hired that month, according to the DOL. That’s the most job openings ever recorded in a month since the DOL started tracking the stat in 2000.

What does that mean? The skill gap is alive and well in the United States, as companies are looking to hire millions of people, but are having trouble finding talent with the right skills.

It also highlights the economic effects of the skill gap. If those 5.7 million job openings were filled, the unemployment rate would drop from 4.9 percent to 1.29 percent, which would be the lowest non-wartime unemployment rate in American history.

Another indication of the skill gap – sloooow hiring

Here’s another unusual yet persistent phenomenon that has sprung up – companies are taking longer to hire than ever. The Washington Post reports that it now takes companies 23 days to hire someone, up from 13 days in 2010.

In their article, the Post quotes economist Andrew Chamberlain on why that is. He said it’s likely because low-skill jobs are quickly evaporating in the United States and are being replaced by high-skill roles.

"My belief as an economist is that it has to do with a shift away from more routine jobs, to those that require more judgment," Chamberlain told The Post. "Those jobs are harder to screen for, and more costly if you make a mistake hiring for them."

Combining the two aforementioned data points, it’s evident the job openings in America are increasingly for high-skill jobs. And there are not enough people in the American economy who have the skills necessary to fill them.

What’s the solution for organizations?

There are obvious economic consequences from this skill gap. But think about it from an organizational perspective – many companies have a need to hire, and yet can’t find people with the right skills to do the job.

This makes sense, as research shows skills are evolving faster than ever. Fact is, employees and the educational system can’t keep up with so much change.

That leaves smaller and smaller pockets of people with the right skills for certain jobs, who are becoming increasingly sought after. Rather than overspending to compete for them, a better solution for companies is to look for people who have the potential to learn, and then provide them with the needed training to learn those skills.

Some organizations are hesitant to do this because it takes hires slightly longer to get up-to-speed. But that’s a minor cost compared to the much bigger problem of consistently being unable to fill open roles, which kills growth.

Want to build a culture of learning at your company? Download our ebook today on how to do exactly that!