The "Most Frustrating" Thing a Boss Can Do Is...

If you are a manager, and your goal is to build strong and lasting relationships with your employees, there are two characteristics you should embody:

At least, that’s what the data says.

Recently at LinkedIn Learning, we surveyed 2,968 professionals and asked them the most frustrating quality they've experienced in a manager. The runaway winner – a manager whose expectations aren’t clear or frequently change. 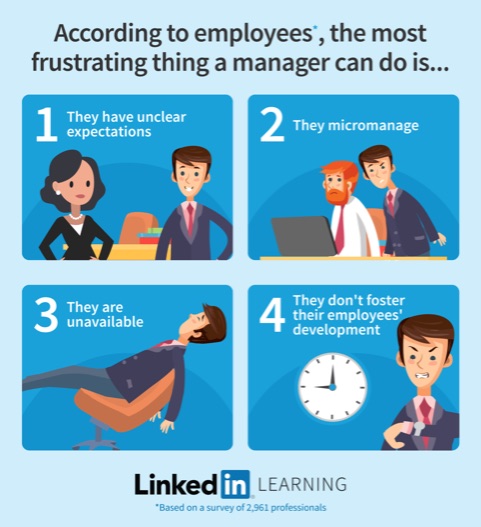 And these issues lead to people leaving companies. Our data revealed that 36 percent of employees have quit their job because their manager exhibited one of those qualities, and another 15 percent are strongly considering it.

Leadership Experts Weigh In: Clarity Comes Down Having to an Aligned Strategy

"A lack of clear expectations is the root cause of poor performance,” Lisa Earle McLeod said. “Leaders often think they're clear, but the data tells us a different story. Employees need to know why this matters (the purpose) and what good looks like (performance expectations). Show me a leader who says, ‘I shouldn't have to tell them, it should be obvious,’ and we'll show you a team that isn't clear."

“Unclear or changing manager expectations are often due to the lack of a strategy or a failure to understand the organization’s strategic plan,” Figliuolo added. “If you don’t have clarity on the strategy, it can lead to frequently shifting direction, an absence of prioritization or confusion about what the team should be working on next. Building a good strategic plan is a great way to solve one of the biggest root causes of this issue.”

The next two on the list – being a micromanager and being too unavailable – are opposites. It shows how difficult being a manager can be; go too much in either direction and problems arise.

As far as micromanaging, Dewett and Figliuolo agreed that it often stems from a boss who has a tough time trusting their employees and/or doesn’t want to give up the work that got them to that position. The third flaw the list – being unavailable – is one Figliuolo believes is based largely on a weakness that can be learned.

“Much of this latter issue stems from leaders not being good at giving feedback,” he said. “The more comfortable you are with giving feedback, the easier it is to engage with your team members even on the most difficult issues.”

The fourth on the list – not fostering professional development – is one that most managers want to do, Dewett said. But their mindset prevents it from happening.

“Managers know it’s important to foster the development of their employees,” Dewett said. “They also acknowledge the need to engage this type of behavior. However, the personality that drove them to become a supervisor (for many, not all) is very self-focused: success is my responsibility, I am in charge of growing me abilities, I don’t need to rely on others since I’m in charge of my future, etc. To the extent this is true, they often under-appreciate their role in developing others since they assume others are taking care of it – just as they did.”

That said, while all of these traits in a manager are frustrating, employees need to take responsibility and be proactive as well. This is particularly true with the most frustrating flaw of all – unclear expectations.

"The onus isn't all on the manager,” Elizabeth McLeod said. “If you don't feel like your manager is providing clear expectations, ask clarifying questions. If you feel as though your manager's expectations are continuously changing, ask about priorities. Communication goes both ways."

What to do With this Data: The Four Must-Learn Skills for Managers

Managers, and people who develop managers, consider this a roadmap. Yes, there are many aspects to being a good manager, which take a lifetime to master.

That said, these are the most pressing issues. If you struggle in the four top areas listed, you will likely frustrate your employees and drive them to leave.

In other words, setting clear expectations, effectively delegating tasks, connecting with your employees and fostering their growth are must-learn skills for managers.

Bottom line – being a manager is hard. Really hard.

But these courses can help. They’ll at least ensure you avoid the absolute biggest mistakes.