Good News: You Can Now Collaborate in Real Time With Office 2016 for Mac. Here's How.

Users who have migrated from Google Apps have long been frustrated with the lack of ability to collaborate in real time on the desktop version of Office 2016 for Mac. But, as of Jan. 18, Office 365 subscribers should have the updated version 16.9, allowing them to work together in MacOS.

How to Collaborate in Real Time With Office 2016 for Mac

As you should already be an Office 365 subscriber to get this feature, get started by making sure your document or file is saved in OneDrive, not on your local desktop. Saving it to OneDrive will automatically turn on Autosave, another recently introduced feature. 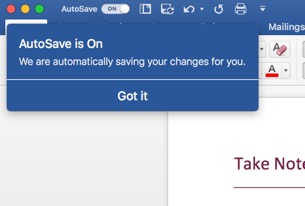 Once it’s been saved to the cloud, you can get started sharing the presentation by clicking “Share” on the top right-hand side. Type a name or email address, and the user will be invited to work on the document.

Initially the document will launch in the browser, but the user will have the option to open it in the desktop version if they have it installed. 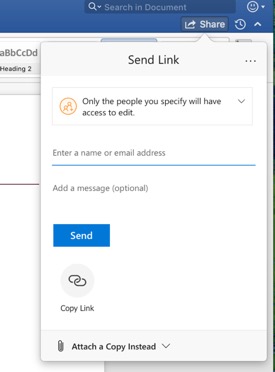 And that’s it! You’ll be notified by an icon on the top right-hand side that the other user is also working on the document at the same time.

If you’re an existing Google Apps user, it’s a similar interface. You can even see what they’re changing in the document, as the cursor will appear where they are editing.

If you’re an Office 365 subscriber who uses the desktop version on a Mac, you can get these new features by visiting Help à Check for Updates.

Jess Stratton has taught more than 40 courses for LinkedIn Learning. Some include: