The Google Drive App is Going Away. But Relax — There's a Better Solution

Bad news, Google Drive fans – the app is going away. But relax – there’s a replacement (two, actually). And it's an improvement.

You might have seen the pop-up below, saying that Google Drive is going away. Well, the deadline is quickly approaching: you have until March 11 to install Drive File Stream or Google Backup and Sync, the replacement apps by Google.

That’s right. The old Google Drive app is going away, but that doesn’t mean you’ll have to migrate off of the popular cloud storage app or move to a different service.

The replacement app will depend on whether you are a business or consumer user. Right now, both groups are using the same Google Drive app. However, they are splitting into separate desktop apps.

Business users (using the full GSuite of apps) should click to install Drive File Stream. This allows the same functionality as before, but with much needed bandwidth and storage improvements. Support has been added for the syncing of Team Drives. Files are accessed on demand, to use less storage space on hard drives.

The app is available for both Windows and Mac users, however the location of Drive has changed. For Mac users, Drive is found in Finder under Devices.  In Windows, users can find their files as a mounted drive in My Computer. 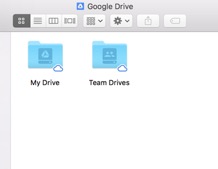 Consumer users of the free Google products (such as Drive, Gmail, Calendar, etc.) will be directed to download Google Backup and Sync. This makes it easy to access, sync and backup both files and photos from external SD cards, such as from digital cameras, GoPros and drones.

You’ll still be using the same Google Drive interface on the web, and those synced photos will be there. Previously consumers needed two separate apps, one for Google Drive, and one for Photos. This new single app replaces both of those.

Google Backup and Sync is available for both Windows and Mac users.

The mobile apps you are using for Google Drive will stay the same, just as the web version of Drive will. The only change is the desktop sync apps.

If you’ve been unsure or hesitating, it’s perfectly OK to download these replacement apps. It’s a positive change and both apps contain new features that will save both time and hard drive space.