But over the last decade, as technology has transformed every company and every competitive dynamic, those lanes are suddenly merging. While the ability to lead, collaborate and communicate are still critical to landing a job, it’s having experience in the latest technical skills that will get hiring managers at the top companies clamoring for your attention.

That’s what I heard after interviewing human resources leaders at 25 of the 50 LinkedIn Top Companies in the U.S. These HR heavyweights — spanning industries from technology and finance, from management consulting and media — all want the same thing: people with experience in machine learning, cybersecurity, data analytics and cloud technology. And the most in-demand roles: engineers and data scientists with these skills.

As new technologies like predictive analytics and artificial intelligence take hold, companies are having to seek out talent that enables them to keep up and stay ahead.

“We are looking for software engineers and data scientists — change agents who want to tackle the transformation of digital commerce enabling payment via taps, dips or swipes on smartphones, tablets and even cars and appliances," said Visa’s Executive Vice President of HR Michael Ross.

Even roles outside of R&D require a level of tech-fluency and knowledge. At JPMorgan Chase & Co. for example, bankers need to know more than just numbers. "As our customers in the consumer bank evolve, and as simple transactions continue to migrate to digital, we are looking for more tech savvy, complex issue resolution and relationship-oriented bankers,” said the company’s HR head, John L. Donnelly.

Staffing for these future products and ideas is incredibly difficult, says hiring leaders like Verizon Senior Vice President and Chief Talent and Diversity Officer Magda Yrizarry. You’re looking for people who have skills that might be hard to define — or you need to get people who will invent those skills themselves. That’s especially true at Verizon, which is pushing into 5G technology.

To find that talent, Yrizarry says, “You hire people who have in the past been able to bend the curve on technology. They may not have bent the curve on 5G for example, but they were there to create earlier iterations of technologies like IoT or cybersecurity. So you have a confidence that they are not beholden to the past, that they can create the future.”

Competition for these new skills and related roles is fierce. At Square, engineers with machine learning and data science experience, as well as front-end developers, are in high demand. “I think a lot of tech companies are looking for similar types of folks,” said Square’s Head of Talent Acquisition Taylor Cascino. “So we find ourselves competing with other [technology] firms a lot of the time."

For small tech companies like Square, attracting talent means competing with industry behemoths. To stand out, especially on the engineering side, Cascino says the company’s mission to help small businesses thrive and succeed, helps. “It’s a little bit different than adjusting pixels on a social networking site,” he said. “Not to say that that’s not valuable, it’s just less tangible.”

At Workday, the company is still working to make its brand an employer of choice in the technology space.

“It’s different if you’re a Google or a Facebook where people immediately understand that this is a great place for technologists to be,” said Workday’s Chief People Officer Ashley Goldsmith. “But I think we’re still developing our employer brand as a place where technologists would want to grow their career.”

LinkedIn’s latest Workforce Report, which tracks employment trends in the U.S., found that April had the strongest month for hiring since June 2015. However, adding to the difficulty that some companies face in hiring highly-skilled workers is a tightening labor market, where there are more open jobs than workers to fill them. The fast pace of technology also makes it hard for academic institutions to keep up.

“It’s very difficult for a professor to build a curriculum or course that addresses the needs of tech in real time,” said Ardine Williams, Amazon Web Services’ vice president of global talent acquisition.

For some HR leaders and their companies, it’s not necessarily the skills that are hard to find, it’s recruiting diverse talent — including people of color and women — with those skills. Though a few cited a pipeline problem, others acknowledged that it’s about meeting talent where they are.

"One area [in the hiring process] that has changed is our increased focus on diversity and inclusion, which has greatly influenced our hiring strategy,” said Visa’s Ross. “You’ve got to go where the talent is.” For Visa, this has meant targeted recruiting efforts at events like the annual National Society of Black Engineers convention.

An analysis of skills of current employees at the 50 LinkedIn Top Companies in the U.S. reinforced what I heard from HR leaders. Not only are technical skills the fastest-growing among current employees spanning industries and companies on the list, but they are also the most sought after by recruiters who are using Inmails on LinkedIn to reach prospective hires.

These skills include Web programming, followed by software engineering management and Java development. Cloud computing along with statistical analysis and data mining also ranked highly among the skills recruiters are after.

Among the most sought-after technical skills within the engineering function were Web programming, followed by Java development and C/C++ coding languages. Cloud computing and machine learning also showed up near the top.

Outside of technical skills, social media marketing has been growing significantly among the top 50 companies across all industries and functions, with a 61 percent year-over-year growth rate. Statistical analysis and data mining in the technology and financial services industries had a 25 percent growth rate across all functions.

Check out the graphic below for the most sought-after skills by industry, across functions for the top 50 companies: 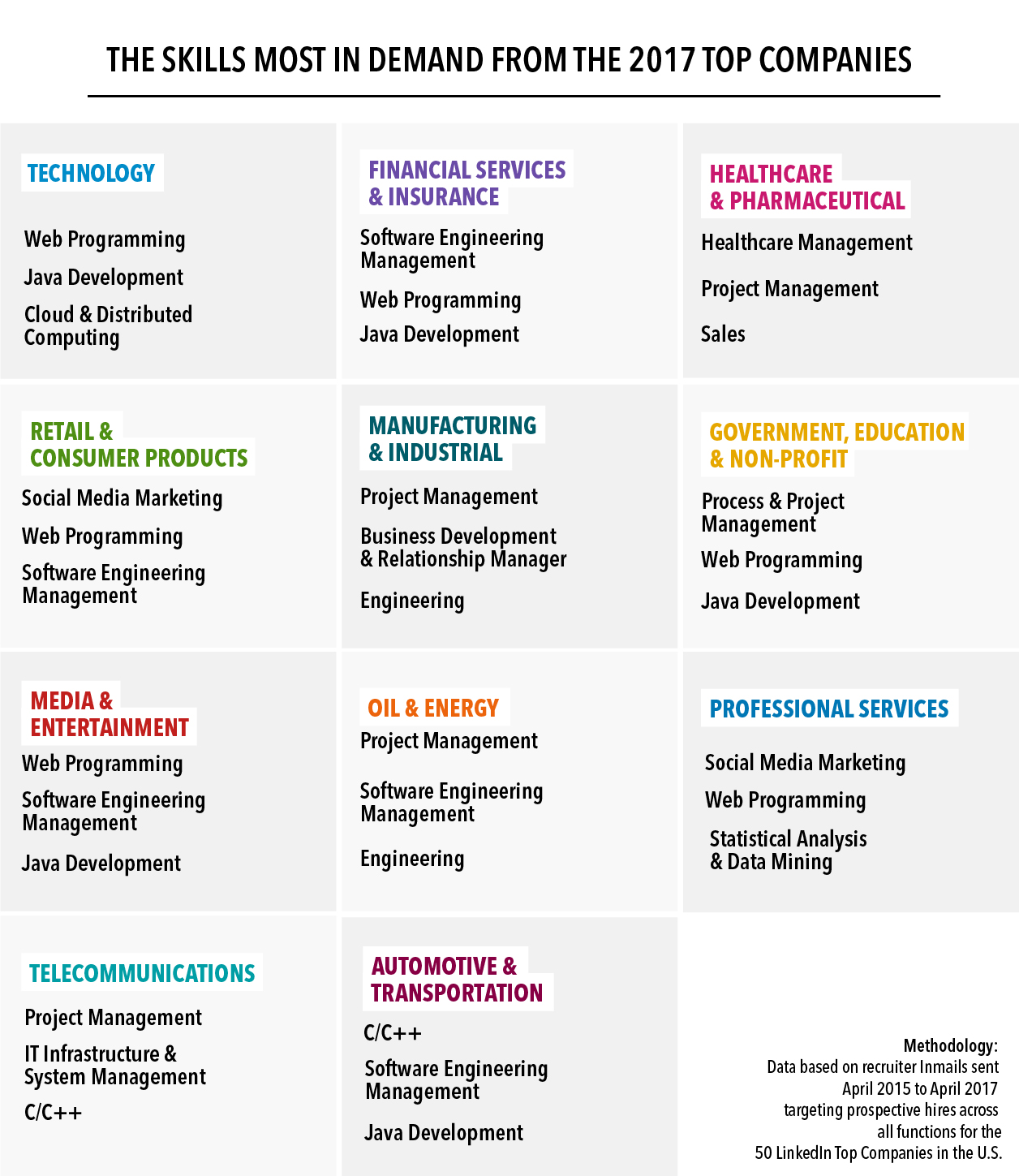 Besides robust hiring in the tech and innovation areas of the businesses, many top companies said they’re also hiring heavily in sales. “Sales and engineering are the two most populated pieces of our company,” said Dell’s HR chief Steve Price. “Those are two areas where we’re always on sharp patrol. We’re predators.”

While hard skills and technical know-how are important, soft skills — or competencies as some HR leaders like to call them — still matter.

“What’s most in demand and the hardest to get is the combination,” said Comcast Cable’s EVP of HR Bill Strahan. “It’s getting, for example, someone who is highly technical, but then has that and the leadership skills or to have that and the business strategy skills.”

When asked what’s needed to stay competitive in today’s labor market and excel in the future workplace, HR leaders largely cited the ability to learn as most important.

"[You] need to display a voracious appetite to learn,” said BlackRock’s Global Head of HR Jeff Smith. “No matter what stage you’re in in your career, you should never give up the mindset of a student.”

Amazon’s Williams agreed: “The pace of technology continues to accelerate and it doesn’t show any sign of slowing. You must have an insatiable curiosity about what’s changing and how, and stay current. Otherwise, you're going to be left behind."

You can learn all of these skills at LinkedIn Learning.